The Band has, this year, strengthened in numbers, there has been some movement in players – Grace and Esther join the Front row Cornet and Trombone section respectively. Elia departs to join the RNCM band (We wish him all the best for his musical future, well done!!) Joe arrives on Euphonium and we welcome Peter on Eb Bass. We’d love to see some more cornets on the ranks. Come on down.

The band travelled to the beautiful Lake District town of Kirkby Lonsdale to perform in their first entertainment contest. I have never been so proud of a band who across the board bore no nerves in performing the first movement of Little Suite for Brass, Trombone solo The Ash Grove (Lee Pritchard) and Bohemian Rhapsody. The applause was well received, and when the (Adjudicator) judge was ready with his remarks, we won! This was in the learner band section and our remarks were extremely complimentary!

Spring, and exciting times ahead!

From Christmas with a twist the band performed at the historic Flixton House with the very capable Flixton Community Choir. Music was challenging and in my opinion, performed with enthusiasm. The Band had a break and reconvened in the New Year of 2019 to find out our MD had desires to enter the band into a entertainment contest in June in the lovely setting of Kirkby Lonsdale. Extremely challenging, and met with great enthusiasm . We even got to play in a movie! Well, a movie made by masters students from MMU, it was wet and windy during storm Helen, but we got through it for five minutes of fame.

However, and as usual busy lives take over and we find that each rehearsal is frustrated by late starts, non-practice by some individuals and a future of band building is evident we still need new blood.

In April, the great news of youngsters developing and being bands people of the future was evident where two members of the band attained their Grade 5 passes. This is fantastic and to be honest I can hear their development in their continuous progress of performance, look out Black Dyke, Faireys and Fodens, they are coming to a band near you n the future!!

Whilst its rewarding to hear and see such success, we are reminded that we need to back-fill with more of the same and our profile in the wider community will certainly add to helping with this.

In this column I’ve often alluded to tuning, lateness, practice and non-attendance. The latter cannot be helped as some have to work or be with family members sometimes. Lack of practice isn’t an excuse. Use you mouthpiece to buzz on where you can (and cannot take your instrument), it does go to help with your playing. Practice scales you are not familiar with. Listen to others in ensemble and build on your own musicality. I’ve often stopped playing during rehearsal and listened to some real quality – that to me is a sign of great production and evidence of practice. Still loving’ it after 49 years (must be mad!).

From the End Chair – October Musings

September brought a respite in engagements, a busy summer schedule and optimism for the coming months, however we had back to school, and late holidays being taken causing a “void” in attendance at rehearsal. A little sad considering the momentum in progress amongst the players. It seems a shame that players are divided in what they bring to the stand in terms of becoming a better more experienced player and helping, by their input, to move the Community Band upwards and onwards. I’m reasonably optimistic it will happen soon.

Reflecting back over the last three months, it is ever apparent that more hard word is to come, to bring up and standardise playing. More importantly ingrain practice at home, especially on newer more technical pieces and practice can be as little as ten minutes a night / day. New music to our library and rehearsal pads is good – and more technical too, it keeps our interests and improve technical abilities!

Brass banding in general has stagnated somewhat, local education authorities in this area have focused on exam results and subject performance. However, no accent is put onto leisure in terms of music being a hobby. It’s too easy for them to say, “we do have an orchestra”, and “we provide tuition”, but it’s expensive and comes at a further cost to the parent. Back in the day when I was learning at school and in the school band, tuition was part of the curriculum, and essentially within the schools’ budget. Brass Bands, Orchestras, Big Bands etc. were a plenty. Halcyon and enjoyable days for me (and my similarly aged cohorts).

I feel that the only way to increase our number, is to continually improve, advertise, promote and work towards a staged concert….maybe with the aid of some superstars from the talented and multi-faceted Championship section. Providing inspiration is the key for newer and younger players, otherwise they move on or give up altogether!

When I played with another band not so long ago, an inspirational Musical Director said to his band “If you are going to leave any band to move onto another, don’t leave it unless it is for the right reason – a better and higher level.” – I guess if you are fed up with where you are, in any aspect of life be it work or leisure, you need to self evaluate and move onward and upwards.

The Band is moving in the right direction…..

Being really humbled by my position in the band (principal cornet) I can see and hear great sounds all around me. The powerhouse that is the back row, ably negotiating more complex notation and reading pieces ably. The middle section with a returning (to playing) horn player who has also improved greatly over the weeks and the powerhouse (not used lightly) that is the Bass end bolstered by another returner to playing with the band.

Sometimes players do not realise the blend of sound they input and the tunefulness that ensues, made more apparent by their ever growing confidence and belief that they really can play a brass instrument!

Long may all of them play and enjoy..

As a reminder, if you as a reader used to play brass or want to start playing, contact us and come along. All ages and abilities welcome.

On an extremely hot day in July, the band appeared as part of Trafford live. A particularly good performance aided by members of the main Flixton Band, ice cream and copius bottles of water!

Your Local Band Needs You! Join us | Support us | Book us 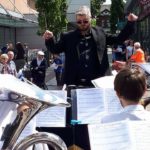